In this post, I’m reviewing four of my favourite outdoor adventure documentaries; Losing Sight of Shore, Fish People, Maidentrip, and The Yukon Adventure. They’ve been a source of inspiration for me and if you are an avid outdoorsy-type then I think you’ll also enjoy them.

Losing Sight of Shore follows the epic adventure of a 4 woman team who become the first to row unsupported across the Pacific Ocean. The film is shot almost entirely by the crew in video diary entries. This format helps immerse you in the emotions that the crew are experiencing. You share in their initial excitement about the voyage, their fears and tribulations when navigating through storms, and their frustrations with various setbacks.

The film is also about female friendships and supporting one another through physical and mental exhaustion. These women learn to trust and depend on each other with their lives. There are several examples of this but one that stands out is a crew member waking up every 2-hours for her rowing shift in the dead of night while being incredibly sick. She doesn’t complain once and instead speaks to the importance of everyone pulling their weight.

One of my favourite parts of the film is getting to see how the women prepare for the trip and their daily routines once they are aboard the boat.

As someone who grew up in a coastal community, I love Fish People for its portrayal of the diverse relationships that humans form with the sea. The documentary follows six people who recount how the ocean came to be an important part of their lives.

The  film opens with Kim Werner a free diving spearfisher from O’ahu, Hawaii. Kim learnt free diving from her father who spearfished to provide food for their family during economic hardship. She quickly surpasses her father’s skill level and seems fearless as she recounts her changing relationship with sharks. Kim, like her father, uses spearfishing to provide wholesome food for her family and community.

The film also tells the story of Lynne Cox an endurance swimmer who swam the English Chanel when she was only 16. Since that swim, Lynne has added several endurance swims to her repertoire including the Bering Straight, the Cape of Good Hope, and a swim in Antartica. Scientists have long been interested in Lynne’s ability to swim long distances in frigid waters in only a bathing suit.

I’ll let you discover the other stories for yourself. They are all unique and inspiring in their own ways.

Maidentrip follows young Laura Dekker, 14, as she circumnavigates the world unassisted in her sailboat Guppy. An adventure that almost ended before it began because Holland authorities launched a custody battle against her father after they learnt of her intended trip. After winning a 10 month court battle, Laura begins her two year voyage spanning 27,000 nautical miles. She becomes the youngest person to sail the world alone.

Maidentrip is filmed predominantly by Laura herself in video diary entries. Incredibly, Laura is rarely phased by any of the obstacles thrown her way. While aspects of her personal life are often conflicted, her confidence in her ability to sail does not falter.

While the film is an excellent adventure film, it’s also a coming-of-age-story about a young girl leaving family, exploring new cultures, and pursuing a dream when few believe in you. 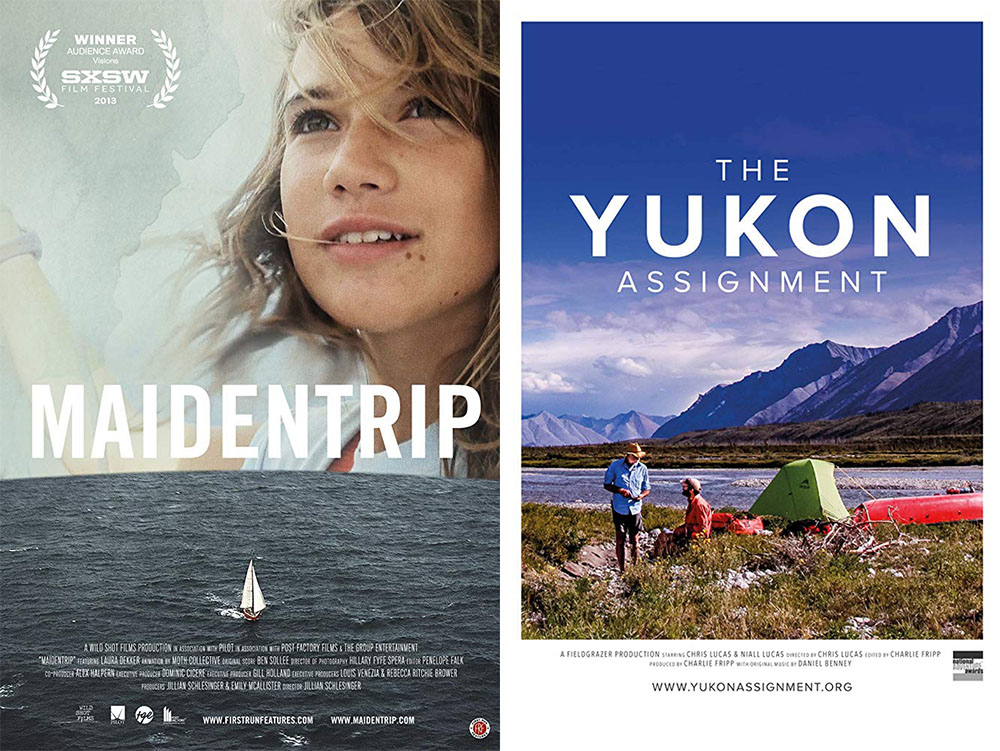 The Yukon Assignment is about a father and son’s 500 mile canoe trip in the Yukon Territory. It’s not a film about record breaking or overcoming the odds but a humble account of backcountry travel. The film has great storytelling, amazing landscapes, wildlife encounters, and a challenging adventure.

One of the things I really enjoyed about this film is the relationship between father and son. Niall Lucas, an aging father, puts his trust in his son for planning and navigating this long trip. Meanwhile, Chris Lucas feels the pressure to create an unforgettable experience for his dad. Throughout the adventure they learn a lot about each other, about family, and Chris discusses his own excitement and fear about becoming a new dad. The banter between Chris and Niall makes you quickly grow to love the two protagonists.

Outdoor lovers will enjoy the bear encounters, struggles with mosquitoes, foraging for bilberries, battling hypothermia, challenging paddling routes, and other joys and challenges these two encounter.

If you have watched any of these outdoor adventure documentaries I’d love to hear your thoughts! You can also check out my Instagram recommendations and book reviews.

In late September, myself, my fiancé, and our dog

I’ve been visiting some amazing places in New Br

There’s something to be said about the calming e

My latest blog post, link in bio, talks about my f

Dunbar Falls is truly beautiful in autumn. The wat